Una apis, nulla apis – ‘One bee is no bee’. The proverb speaks of the quintessentially collective nature of bees, a recurrent cultural idea, but one which strictly speaking is built on error. There are many thousands of different species of bees on this planet, and in fact only a small proportion are social species – most are solitary. The cultural characterisation of bees as a thoroughly collective entity reflects the preeminence of Apis Mellifera, the western honeybee, in human thinking about apian life, which in turn reflects the intricate entanglement of this species with human society for many centuries. Honeybees became the bees, standing for all apian existence, and honeybees do indeed manifest a striking collectivism. 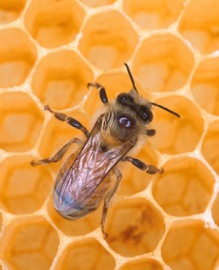 When stung by a bee, one might well experience that as an encounter with an individual insect, and in a certain sense so it is; but for anyone who keeps bees the encounter is always with a collective, the colony, the hive, of which individual bees are merely emissaries. Unsurprising then that the cultural history of the honeybee is characterised by a never-ending thought experiment concerning the nature of collectivity vis-a-vis individuality. One could almost trace the changing cultural fortunes of the ideals of collectivism and individualism and their various ideological expressions solely through a historical analysis of discourses around the meaning and significance of the bee colony. Insofar as western thought has often been structured by a binary opposition between society and the individual, honeybees with their striking collectivism have been a barometer of the ever-changing relationships between those dialectical poles.

In the popular imagination the collectivism of honeybees is often evoked through examples of their apparent altruism, thus: bees work themselves to death in just a few weeks producing stored honey for the future security of the hive; they will sting any creature that threatens the colony though this means the death of the stinging bee; and sick bees will voluntarily exclude themselves from the hive wherever possible to minimise the spread of infection. In each of these examples, collectivism is construed as the negation of individuality, the antithesis of self-interest. This is in itself an individualist and anthropomorphic framework, since for an entity with a genuinely collective mode of existence there are no individuals to be negated and no selves to be sacrificed. Nevertheless the cultural perception and status of bees has very largely been shaped by changing political inflections of this idea of self-denying altruism.

At least as far back as ancient Greece, bee colonies were thought of as a kind of political community in nature, an ideal natural polity, and bees symbolised virtuous dedication to the collective good. This notion of the moral bee, wherein the bee is a symbol of civic virtue, as distinct from private interest, runs very deep in the cultural imaginary, having undergone various transformations and reinterpretations without ever quite disappearing. Interestingly it has been inseparable from the perception of bees as industrious, productive and hard-working; the dedication of bees to the colony is seen as manifest in their activity – they work not for themselves but for the good of the hive, and every bee must work. The drones who do not work are soon excluded from the hive and left to die when they have served their reproductive purpose. So the cultural enrolment of bees as symbols of civic duty, altruism and collective virtue is every bit as much an economic vision as a political one, amounting to a political-economy of bees.

This has been interpreted and used historically to assert the righteousness of certain forms of political-economic organisation, as demonstrated by their ostensible basis in nature. Throughout much of the medieval and early modern period for example, bees were hailed as paragons simultaneously of good governance, industriousness and obedience; the vision was of bees as exemplary of a natural order in which everyone knows their place and fulfils their duties efficiently, thus contributing to the common good, in a kind of apian functionalism. English Royalists in the 16th and 17th centuries pointed to the perfect submission of bees to their divinely ordained ruler as evidence that monarchy is founded in nature. A telling feature of such visions of bee society as the epitome of natural order was their assumption that the colony was a patriarchy, that the Queen was in fact a male King Bee, a misconception that was only finally dispelled at the beginning of the 17th century.

But the collectivism of bees has not only been made to signify willing subservience to a fixed order; the socio-political history of bees also encompasses a tradition of more egalitarian associations. Whilst Royalists in England hailed the divine monarchy of bees,

revolutionaries in France adopted the beehive as a symbol of the Republic, denoting the community of workers and the civic ideal. This alternative signification was always latent in cultural representations of bees, but with the social and political upheavals of the 19th and 20th centuries it became much more sharply distinguished from the more hierarchical and conservative strands of bee mythology. Bees were sometimes adopted as symbols of cooperative organisation and communal ethics by social reformist and workers’ movements, though this was nothing like as prevalent as the association of bees with the evils of collectivism by its opponents. For them the bee colony became not an ideal polity but a mindless and malign collective, the essence of which was ‘the swarm’, a multitude devoid of individual intelligence and free will.

Although it did not become fully developed until the 20th century, the Romantics were amongst those most responsible for crafting this negative vision of apian collectivism, in their critique of the dehumanising and de-individualising processes unleashed by industrial capitalism. For them the bee colony was akin to the industrial factory, a mechanically ordered production system in which individuals were turned into mere servants of the machine, devoid of meaningful individuality. This romantic critique deeply informed Karl Marx’s critical analysis of capitalist production and its alienation and dehumanisation of

the worker. Ironic then that a century later, in the context of the Cold War, an almost identical critique was being made of communism by the ideological defenders of capitalism. From the 1950s onwards, bees came increasingly to be represented in mass culture as an evil collective, as a swarm, lacking individuality and subject to the irrational mentality of the crowd; the real target of course was the Soviet enemy and its supposed threat to western individualism and the American way of life. For much of the second half of the 20th century this ideological use of bees was pervasive, and bees became a symbol of anxiety and dread of the alien invader, whether communists or racial ‘others’.

This ideological formation persists, as do all previous bee discourses in some form, though it is much less prominent since the end of the Cold War. More recently there has also been a significant rehabilitation of the cultural status of bees in the context of Colony Collapse Disorder and the serious decline of insect pollinators. Bees have increasingly come to stand for the damage that late capitalism and industrialised agriculture is wreaking upon the eco-system – they have become a ‘poster child’ of the environmental movement, and not without some justification. The final irony is that this development has seen many capitalist corporations scrambling to adopt ‘bee-friendly’ initiatives as a way to showcase their green credentials. It seems the civic bee is far from dead, and organisations keen to display their civic virtue still clearly hope to channel something of its symbolic power.

Claude Levi-Strauss famously suggested that animals are ‘good to think with’. When it comes to social and political thought, he might have added, bees may well be best of all.

For detailed cultural histories of the honeybee, see: